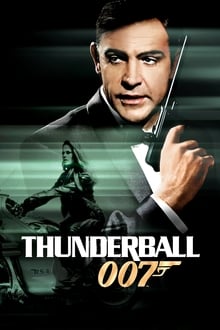 It can be difficult and not very useful to compare the early James Bond movies to the later ones. The female characters become more than merely ornamental and more interesting, the plots become more intricate, the villains less stereotypical, and the special effects better and better.

Having said all that, I must confess I give Thunderball a pass on any such criticism or comparison, for a rather odd and personal reason, and not just because I like Sean Connery! As a teenager I sort of inherited the soundtrack album for Thunderball, either from my dad or an older brother. That was well before I ever saw the movie. Except for the Tom Jones title song, the album is all instrumental, and I found myself playing the album while doing school work, or reading, or writing short stories and later on, novels. I am surprised I didn't wear the grooves out. Later my taste moved towards instrumental new age and finally on to ambient music.

Where was I? Oh yeah, so when I finally watched Thunderball, I recognized the background music whenever it came into play. So I liked this film in a way I never quite experienced with other James Bond films. I admit I don’t know that this helps prospective viewers, so I will add that if the newer Bond films seem to glossy and too much like each other for your taste, Thunderball is a slightly different animal, so you might enjoy it. And did I mention it includes a Sean Connery?