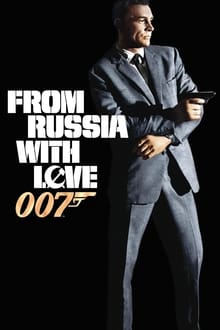 There's a saying in England: Where there's smoke, there's fire!

From Russia With Love is directed by Terence Young and adapted to screenplay by Richard Maibaum & Johanna Harwood from the Ian Fleming novel of the same name. It stars Sean Connery, Daniela Bianchi, Lotte Lenya, Robert Shaw & Pedro Armendáriz. Music is by John Barry and cinematography by Ted Moore.

James Bond's second cinematic outing has 007 sent on a mission to Istanbul to try and acquire a Russian cypher machine known as Lektor. It's a trap set up by SPECTRE, who formulate a plan to upset the world order whilst murdering Bond in revenge for his killing of their agent Dr. No.

Spy Hard! A certain JFK had announced From Russia With Love as being one of his favourite books, thus making the minds up of producers Broccoli & Saltzman to make Fleming's Cold War thriller the follow up to Dr. No. It's a favourite of many a Bond aficionado because it represents one of the few occasions where Bond was still down to earth as a person, a hard working agent forced to do detective work. The adaptation is very literate as well, with a high fidelity to the source material a major bonus to Fleming's fans. The story is tautly told, often with dark tints the deeper Bond gets into things, and a number of excellently constructed set pieces fill out the latter half of the picture. It's not hard to understand why Connery cites this as his favourite Bond film.

Though it is mostly free of the gadget excess that would become a trademark of the franchise, it's still very much a quintessential Bond movie. Exotic locations and exotic foes, eye poppingly gorgeous ladies (Bianchi smouldering like few others can), pre-credits sequence, the snazzy title credits (here on a dancing lady), title song crooned by a big name (Matt Munro), Barry's blending of the Bond theme into the score, Blofeld (a faceless Anthony Dawson) and an impressive cast list. One of the film's big strengths is the cast assembled, Connery (firmly moving into iconic realm) is aided considerably by the presence of Lenya, Shaw and Armendáriz, while the first appearance of Desmond Llewelyn as Boothroyd (latterly to be known as Q) is a telling point in the series.

With a $2 million budget in the coffers, the makers were able to really push the boat out technically, and so they were rewarded as the pic went on to gross nearly $79 million Worldwide. Crucially it became apparent that James Bond was popular outside of Britain, the template had been set, what would they do with the next Bond outing we all wondered? 8/10