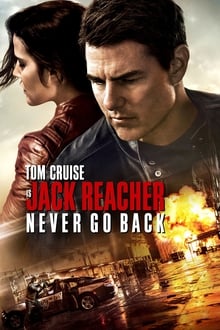 ...but he did go back and got into a trouble!

The original source is a long book series, so they did not do it in order. Like the first film, which was based on the ninth book, this one was on the eighteenth. It was a stylishly made film. The actors were good, and their stunts were excellent. But not the storyline. This is a very familiar theme. You know, someone framed you and you go on to dig the truth while everyone trying to hunt you down. There are lots of close encounter, which give great thrilling entertainment. So, other than the story, everything looked fine.

Jack goes to meet one of his ex colleagues at his old headquarters. But soon he discovers she's behind the bars and now he's too for the crime they did not do. So escaping from the prison and looking for clues, who framed them and why, all one by one disclosed with some excellent running-chasing action sequences. The film almost as good as any timepass action film. But like it was the new wine in an old bottle. So it won't work for everyone, especially those with greater expectations.

The 55 year old Tom Cruise on the edge to become a veteran actor, but still he got that action hero macho in him. Probably another 3-4 films, including the upcoming 'Mission: Impossible' sequel. So this franchise could replace his cast with younger one in the future. Because another 20 books to go. Though, I'm thinking about the television series. Cobie too was awesome. The film justifies to its original, but not more than an above average. So good for once watching it.