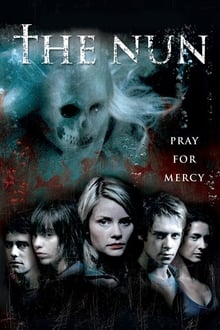 I suppose we could say that this movie is not, shall we say... a 'serious' horror film?. That means that the story is beyond delirious and a bit silly to a certain extent, but that doesn't necessarily imply that it can't be enjoyed. The main premise in this nice little horror flick, is obviously not a very realistic one and leaving aside the so-called ridiculousness of the story, this is definitely a must-see to all slasher fans. It seems however that this film was not exactly acclaimed and my wild guess is that the disappointment comes from grind-house lovers who expected a good'ol nunsplotaition flick and they got a Hollywood-like Spanish slasher instead. The other possibility is that some of the angry reviewers are the ones who assumed that this film was going to be by some means similar to "Darkness", which was written (and also directed) by Jaume Balagueró, who was in charge of the story here as well. Considering that "Darkness" was far more respected when it came out for being among other things so atmospheric and artsy, I wouldn't be surprised if some people expected something mildly similar or at least a few connections with this movie. However, "La Monja" was not directed by Mr. Balagueró, so I really don't see why there should be any connection whatsoever. So my little advice to anyone who is expecting anything remotely similar to "Darkness", is to discard this slasher, because it will turn out to be a major let down.

In "La Monja", six young ladies in a Catholic boarding school, are tormented by a cruel nun called Úrsula, who is also the headmistress of the establishment. One day, during a sadistic purification ritual, Sister Úrsula goes a little bit too far with her medieval methods and tries to drown Mary, one of the students, as a way to purify her sinful soul. However, her cruel ritual is interrupted by the other girls, who rise up against Sister Úrsula and kill her. After that, they decide to make a pact of silence and throw her body inside a pool of holy water. Eighteen years later, Eve, Mary's daughter, begins to have strange hallucinations about a vicious nun who appears out of nowhere. Several people start to die around her, including her own mother and some of her class mates. Right after her mother's mysterious death, Eve takes a trip to Spain with her friends, only to find out that she's merely doomed to confront a terrible fate and discover an awful truth about herself.

The plot clearly promises a nice slasher... and a nice slasher we get!. With a nice variety of well done murders and moderated use of CGI, this bizarre horror gem manages to entertain and mock slasher films for their similarities and lack of originality. "La Monja" is a good exponent of what contemporary slasher films are all about and even though the film is a Spanish production, it does a good work emulating some of the finest American films out there. The supernatural villain reinforces the evidence that the director clearly wasn't aiming to a dark or profound film and instead, he basically wanted to achieve a highly entertaining and unpretentious horror gem to enjoy with some pop-corn and a large soda. If you're in the mood for some genuine and simple fun, give this evil nun and chance and she won't disappoint you with her cruel punishments against the sinners who dare to stand in her way.