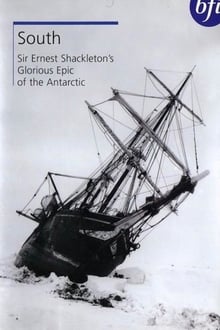 When Frank Hurley loaded his cameras onto the Endurance in August 1914, ready to set sail with Ernest Shackleton's Trans-Antarctic expedition, he had no idea of what he would end up filming. This silent movie, released in 1919, contains Hurley's record of the expedition, and of what happened when the ship became stuck in the ice, leaving the explorers with little hope of rescue. Of course, we know that they were eventually saved, almost two years after setting sail, thanks to an astonishing 800-mile voyage by Shackleton and a handful of men in a tiny boat, but this film shows the resilience of these stranded men, even when rescue seemed impossible. The opening title card describes what follows as a tale of British pluck, and it's remarkable to see how the explorers maintained their good spirits even when things were at their bleakest: training dogs, learning to ski, and continuing their scientific research. Hurley even filmed the moment when the ship, crushed by the ice, finally sank: a few seconds of film that are agonizing to watch even now. And when the ordeal ended, when lesser men might be resting and recovering, Hurley took the time to film the wildlife of South Georgia and the whaling station to which the exhausted men were taken. This freshly restored print is in wonderful condition and allows us to see, for the first time since the film's release, an incredible adventure brought to life. --Simon Leake