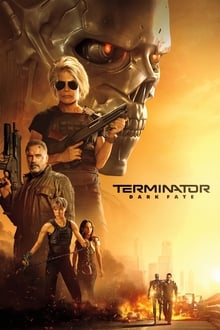 'Dark Fate' was meh. I mean it's basically the Force Awakens of the franchise just more cash grab. Like...how many times can they keep alternating T1 & T2, and yet it's astounding that it never ruins the legacy of the series.

Despite all that, it's the third best in the series. At least this movie knows that Terminator is not for kids! I had some engagement in the movie, even through the reason being that it follows a familiar plot line.

Linda Hamilton and Arnold Schwarzenegger are both the stand outs. Hamilton playing a cranky bad-ass and Arnold playing an involved machine that has a life of his own. Mackenzie Davis was surprisingly not as annoying as I thought she will be just from the marketing alone. Her character was straight forward in terms of motivation and can take damage.

Tim Miller really knows how to direct action scenes effectively and in this movie he delivers some grand action set pieces. However, after seeing the movie a few days ago, only a small selection stick to memory.

Gabriel Luna did a decent job playing the new advance Terminator. They took the "Robert Patrick" approach with picking an ordinary looking guy and making him into the biggest threat of humanity. Although it was a bit hard for me to feel threaten by him as throughout the movie he seemed easily out match by pretty much everyone.

I didn't really buy into Dani played by Natalia Reyes as the main "saviour of the future", mainly because of her stiff acting and everytime she holds a gun it's twice her size.

The visual effects at times looked pretty OK, but the rest looked really bad. It really doesn't help when there's close ups on the effects where you can see the fakeness. At times the movie was a little too dark and I don't mean in tone, just whenever it's night time.

Overall rating: Not as great as T1 & T2, but nothing will without James Cameron magic touch.