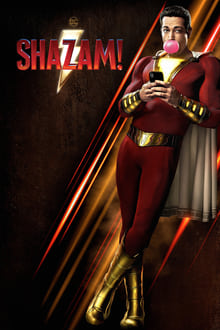 Growing up I was a regular viewer of the Shazam and Isis “Super Power Hour” on television. Back before the days of mega-budgeted Super Hero movies; we had to content ourselves with cartoons and low budget television offerings which did their best to capture the look and action of comic characters within the budget and technology limits they had to deal with. Warner Bros. has brought their latest DC hero to the big screen with “Shazam!” and it looks to launch a new franchise for the studio and build on the success of “Wonder Woman” and “Aquaman” following some earlier disappointments with their planned hero franchise films. The film follows the story of young Billy Batson (Asher Angel), who has grown up in and fled several Foster Homes after being lost at a Carnival years earlier and unable to find his mother. Billy has never stopped trying to find her and even takes extreme measures to try to find her that has gotten him in trouble with the law. While trying to stick up for a family member at his latest Foster Home; Billy is forced to flee from some local goons and finds himself facing an ancient Wizard (Djimon Honsou; who tells him he will now have superior powers when he speaks his name as he is now a guardian against the forces of evil. Billy does not believe this but upon uttering the name; he transforms into a powerful hero in adult form. Zach Levi plays the title hero and soon finds himself eager to test his new powers and his Super Hero obsessed Foster Brother is more than happy to mentor him and make all sorts of viral videos of his efforts and training. Their efforts soon draw the attention of an evil individual (Mark Strong), who covets the power Billy has for himself as along with the Seven Deadly Sins; he looks to become an unstoppable force for evil and sets out to destroy all that stands in his way. The film is aimed more for a younger audience as much of the humor is squarely focused on Middle School level jokes. There are more than a few references to “Big” along the way which does sum up a good portion of the backstory as when he is in hero form; the young boy without a family is a popular and dynamic adult. In many ways this was one of the more odd aspects of the film. Billy is a dour and untrusting individual most of the time; however when he is hero form he is a jovial and goofy individual who acts like a teenager. I could see an increase in confidence but it is odd considering that they are the same person. Levi is very energetic in the part and goes all in and he does a great job of conveying a kid in a man’s body. The biggest issue with the film is that there is mostly a lot of humor aimed at a much younger audience and large gaps with minimal action which made sitting through numerous childish antics a bit tedious at times. Despite this; the film was entertaining and one of the better adaptions of a comic. The door is wide open for future adventures and I look forward to seeing what they come up with next. 3.5 stars out of 5