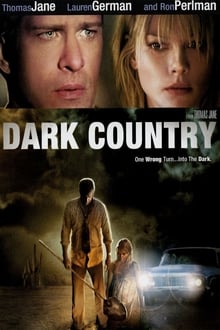 Hitchcock-ian desert mystery that leaves you scratching your head

After a shotgun wedding in Vegas, a couple (Thomas Jane & Lauren German) experiences a night of hellish mystery in the desert. Ron Perlman plays a cop and Chris Browning a curiously intrusive stranger. Jane directed the film based on a script by Tab Murphy.

“Dark Country” (2009) is a modern Hitchcock-ian mystery/thriller similar in tone to, say, “Wind Chill” (2007) but with a different story and inverse setting (the nighttime desert rather than the nighttime snowy forest). The first half is slow-going with mundane dialogues and weird goings-on, but the story picks up in the second. Unfortunately, the last act is muddled and leaves you with many questions. But, if you reflect on it, the answers are there if you care enough to seek ’em out.

Visually, this is a masterpiece of mood and haunting imagery. Have you ever stopped at a rest stop in the middle of nowhere late at night? How about hang out in the desert wilderness at night, whether in a vehicle or on foot? Either can be eerie and “Dark Country” captures this. Story-wise, however, it’s not as good as “Wind Chill”; the strange climax lacks the emotional whollop and is just too ambiguous IMHO.

The movie runs 1 hour, 28 minutes and was shot in New Mexico.