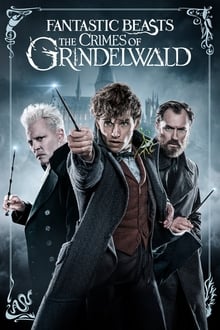 Fantastic Beasts: The Crimes of Grindelwald (2018)

The Harry Potter movies are great but one of the main flaws of the original franchise was the struggle the films had condensing the lengthy novels into movies under three hours. Despite the Fantastic Beasts sequel not being based on a book, it still somehow feels like its stressing to condense a five hundred page book into a smaller narrative.

The movie runs from scenario to scenario so quickly that it’s hard to remember what all happened in its muddled story. That’s not to say the film is terrible at all, surprisingly. For a movie that has serious pacing problems throughout and has more interest in setting up sequels than it is at finding a memorable plot of its own, it’s actually very entertaining.

The returning cast members are all back and while none leave quite the impression they did before they’re all still entertaining in their own way. Newt is back but the movie doesn’t seem nearly as interested in him and his magical monsters than it is with all of the new elements. Redmayne is still terrific in the role, however, and makes the character much more interesting than the script does by itself.

Jacob and Tina are back as well though both of their stories are shelved for most of the film and completely forgotten in the final moments.

The biggest surprise though is that Queenie gets the best arc of any character in the movie. She was one of the more interesting characters in the original and while many of the twists in the film fall flat, the one involving her character was my favorite moment of the entire movie. I’m more excited to see her story resolved than I am most of the other elements.

It shouldn’t surprise anyone who has seen the trailers that the new characters kind of take over the film from the returning players. Jude Law and Johnny Depp’s Dumbledore and Grindelwald are what this film is more focused on than any other plot element.

Both veteran actors shine so much that the movie loses energy when they aren’t on screen. Law effortlessly settles into Dumbledore’s twinkly-eyed wise, yet manipulative schtick.

Depp also kills it as Grindelwald. In fact, it pains me to say this because of how much of an ass the actor is in real life, this is the most I’ve liked Depp as a performer since his first time playing Jack Sparrow. He avoids most of the oddball antics he’s been milking for so many years and delivers a subdued, terrifying performance as Grindelwald. He more than holds his own against Ralph Fiennes, which is saying something.

Other new players are a mixed bag. Zoe Kravitz’s Leta Lastrange is an interesting character but none of the others really stand out. Newt’s brother Theseus is a particularly big missed opportunity. The film never adequately explains what caused the rivalry between the two Scamanders and it all gets resolved before there’s a chance to go into it more. Claudia Kim’s Nagini may have caused a big stir when she was announced in one of the trailers but very little is actually done with her character. It feels more like a stunt than anything else.

The biggest stunt comes from the big reveal in the end featuring Ezra Miller’s Credence. There’s a huge twist that not only breaks established history but feels extremely forced. For one, the movie never really explains how Credence came back to life in the first place. It feels like Ezra Miller became a bigger commodity for DC since he is the Flash so now the franchise is committing more to him than initially intended. There was no hint at all in the first movie that he was secretly connected to existing characters in a big way, so it seems out of left field. Regardless, I love Ezra Miller and hope the twist gets him better material in the future.

The movie doesn’t feel much like a Fantastic Beasts franchise anymore but when it does focus on its titular magical creatures, it really shines. The design and concept of the creatures lead to some of the best visuals of the entire Harry Potter pantheon. In fact, it feels like a real shame that we can’t get a smaller franchise that is just about Newt’s magical zoological adventures. The quieter moments of the movies where Newt is just connecting with a magical animal on its own terms are truly beautiful. Unfortunately, these moments get overtaken by the larger story around them.

I feel like this franchise is straining to be two different franchises at the same time. It would almost make more sense to separate them into a smaller scale “Fantastic Beasts” franchise and a larger scale “Crimes of Grindelwald” franchise. This mishmash of different ideas is feeling a little too much like the Hobbit films.

Somehow though, despite all of the messiness of the movie’s screenplay, I still found myself entertained throughout. While it may never hit the heights of its legendary predecessors, this film easily proves that the Wizarding World still has lots of magic left. Maybe the executives at Warner Bros should consider other avenues like television or other films so that Newt’s film series doesn’t carry the weight of one of the most magical film series ever.

“Fantastic Beasts: Crimes of Grindelwald” may not rise to the levels one would hope for, it still proves itself to be worth your time, if even just for one viewing.