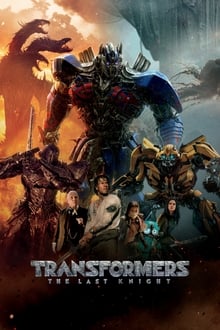 The Transformers franchise has never been good. Some say that the series is "Dumb fun with good action and cool explosions. To me, that could maybe be used to describe only the third movie. The first one is promising and has a certain "child-like-wonder" appeal. But neither of them are truly good. The second Transformers is meaningless garbage.

But when Age of Extinction was released in 2014, the franchise hit new, abysmal lows. Watching Transformers wasn't just a chore, it wasn't just boring, it was excruciating. It was so bad I felt nauseous. I was aggravated to the point of brimming with feelings of genuine anger. They say that if a film makes you feel something, that is a victory in itself. Be it sadness, excitement, intrigue, joy, hope, nostalgia, hysteria, love, fear, warmth - whatever - I tend to agree with that statement. What I felt in Age of Extinction was not a victory. It was a failure. A Guinness Book of World Records level failure.

Transformers: The Last Knight, is at least that bad again.

I guess it didn't dedicate an entire character to being a justification for paedophilia, so it has that up on its predecessor.