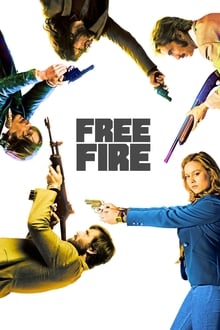 The night of bullet business!

This is one of the surprise films of the year. A limited cast and a one day event film. Except the opening few minutes the remaining film was a crossfire event. It's about two groups caught up in a firing from each other from one mistake to another leading the confrontation. In an abandoned warehouse, with a big amount and the cases new weapons lying in the centre, there's no way in or the out. The only way is to fight them all. So the surviving game begins. Whoever wins at the end can take it all with him.

A very nice concept. With a simple storyline a nice gang fight was drawn out. If you like gangster films, this should watch it. But what bothered me the most was the common logic. You know, they all entered the building after checked for if they are armed, though it can be believed they hid their weapon somewhere and proceeded in. That's not it, the ammos for their gun, they kept firing many rounds like in the army conflict or a video game. That's why it is average to me. Otherwise an unexpected awesome film.

The casting was good, but the surprise was Brie Larson. To see the Oscar winner in such kind of small scale film. Also disappointed her role was very small. But there is still hope! All others were good. With their unique characters, nicely used to share the screen equally. The reason for the conflict is not well explained, so it is hard to say who's good and who's bad guys here. But behaviours and further development give out where the story is heading. The end was predictable, and also we can expect a sequel. If they have one in their mind, surely it would only get bigger.