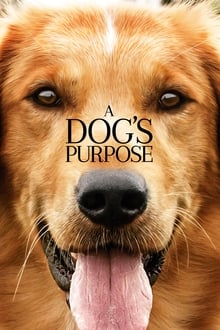 I might a bit overrated it, but it's well deserved that. It has been a long time since I wetted my eyes for a film. Especially for being a tearjerker fan in the early days. This looks like a sequel to 'Fluke', though it justified to be an independent film. Based on the book of the same name, directed by the one who made 'Hachi: A Dog's Tale'. A perfect family film, but entirely a fictional account.

Do you remember those films about a human being trapped in the time- loop, not knowing why and takes a quest to find the purpose? Yep, this is same, but with a dog and not a time-loop, instead, the rebirths. The tale was told from a dog's perspective, his life from puppy to growing old with his owners. The lives he enjoyed, struggled, loved, and not understanding why the life circle keeps repeating. After all the things film wanted to tell us, the story ends with an explanation. Just a simple one.

The dog's the hero, he's found in every frame. The rest of the characters were well designed. Especially the sub-stories to blend with the dog's. All the dogs who acted in the film were awesome. This is one of the best dog films. As I said, it is not great, but surely enjoyable by everyone. Especially in the today's CGI dominated and/or superhero flicks, this is something close to our heart, despite a fantasy tale. So, go it!