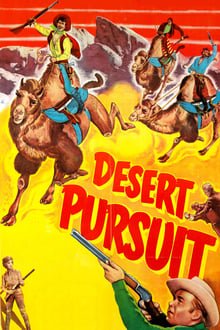 Camels and horses and sand oh my!

"In 1856 Jefferson Davis, Secretary of War, organised the American Camel Corps of the United States Army, which mapped the southern route across the plains and deserts from Texas to California. The building of the trans-continental railroad ended the usefulness of the Camel Corps, and the animals were sold to private enterprise or escaped into the south-western desert where camels were still seen by lonely prospectors more than a decade later."

Quite what filmic significance that opening statement has to how Desert Pursuit pans out is anybody's guess, but it's there and clearly the pic was meant to be more thematically telling than the odd ball piece it is.

Out of Monogram, it's directed by George Blair and adapted to screenplay by W. Scott Darling from the novel written by Kenneth Perkins. It stars Wayne Morris and Virginia Grey, William Sickner photographs it out of Death Valley and the Sierra Mountains, and music is by Edward J. Kay. Plot pitches Morris and Grey on a journey through the desert trying to avoid three Arabian men who are up to no good. There's gold, camels, a burgeoning romance, oh and it's Christmas time as well, handy since there is three not so wise men on the scene and Grey's character is called Mary...

It's actually a harmless movie, a decent time waster. The musical score blends Oater strains with Arabian flavours, the locations gorgeous, while Morris and Grey are a likable coupling. There's the odd dummy flung about the place, the fist fights scarcely believable, and you know how this is ultimately going to end, but it's a fun enough dromedary ride regardless. 6/10