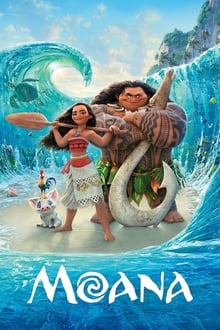 Girl finds out the true identity of her people.

Okay, I shocked when I heard this film did not get the Oscars nod, except for a song. Now I have seen the film and I come to know why. This is a one liner, but developed into a longer version Except the initial parts, this film is like a limited cast/character film. Most of the film takes place in the sea sailing around fighting evil force to break the curse. But at the end, you would feel this kind of story is not worth for a feature film. It looks a perfect short animation theme.

Disney never disappoints its fans, well, for me. So I enjoyed it, it was fun and entertaining, but too simple. The characters were cute, this is a wonderful film for kids and some grownups would too enjoy it. But this is not for all, unlike most of the Disney animations are. Dwayne's voice lending for one of the lead characters was good, but the girl steals the show. Especially if you are a kid and/or a girl.

The best film since 'Lilo & Stitch' on the similar theme about Pacific islands' people. But it reminded me 'Whale Rider'. Overall, I think the story should have been improved a bit, in particular by including a few more characters at least for the partial appearances. This is not the best animation of the year, also definitely the bad one to skip. If your purpose of the watch is entertainment/timepass, it is good at that.