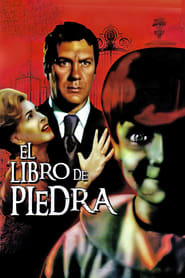 Pursuing the massive success and of "Hasta el viento tiene miedo", horror director Carlos Enrique Taboada achieves an equally engaging horror story with 'El Libro de Piedra'. In this case, Taboada works with Marga Lopez and Norma Lazareno again, but playing completely different roles. Mrs. Lopez is not a strict school headmistress and she becomes a sweet and delicate governess. On the other hand, Norma Lazareno is not a naughty student anymore and she becomes a reluctant stepmother, who hopelessly tries to win her stepdaughter affection. Offering a sinister story that deals with a troubled little girl, this film contains a nice amount of beautiful shots and landscapes, that in some cases, surpases the dialogs and the characters.

In 'El Libro de Piedra', a sweet governess named Julia Septién, is hired by a wealthy man to take care of his young daughter, named Silvia. As soon as the governess arrives to the mansion, she finds out that Silvia is mentally troubled. However, Julia demonstrates her courage and willingness to help the child, and she decides to stay to take care of her. Mrs. Septién manages to win Silvia's affection and the bond between the two of them grows stronger each day. However, the relationship between Silvia and her stepmother, Mariana, becomes extremely hostile and Mrs. Septién, hopelessly tries to fix this. Silvia, on the other hand, finds her affection on a statue of a boy named 'Hugo', as she calls him. It first, Julia seems amused by the idea of the imaginary friend, but as the days go by, she realizes that there is nothing amusing whatsoever. Silvia's obsession with Hugo becomes disturbing to everyone and Julia starts to fear that the child might be involved in black magic and the hostility between her and her family, is not exactly a good sign.

Coping with a few unnoticeable editing mistakes, this Gothic horror masterpiece, manages to be entertaining the whole time. I like to think of it as a dark Gothic drama, with some mellow winks here and there and a final scene that erases all the mellowness with a sudden slap. Most Gothic lovers are going to appreciate "El libro de piedra" for the beauty and yet simplicity of the imagery and the situations. The interface between Mrs. Septién, the governess and little Silvia, is perhaps one of the most appealing characteristics of this film, in which a little girl is basically measured as a monster by everyone. A girl who is feared by everyone at a tender age and yet, there's someone who manages to reach her heart, creating a loving bond and realizing that little Silvia is a sweet girl deep down, no matter how hard it is to see that. "El libro de piedra" causes ambiguous reactions, because in the end, it is not very clear whether if Silvia is pure evil or if she is merely a saddened and helpless soul who ends up devoting herself to a dark supernatural strength in order to find some company