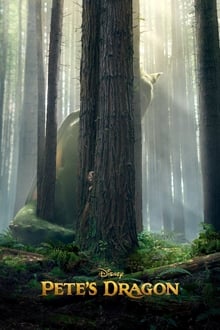 For Pete, home is where Elliot is.

I saw the '77 film prior to this so that I'm not going to miss anything if the upgradation was done in this new version. That was a quite okay film, so do this one. The difference between two was mainly the technology, but there's a major surge on all departments. Somewhat this looked more enjoyable than the old one. Visually very good, all the actors are great and so the locations, but the story was too short, not the film. It was over a 90 minute long and the entire film looked like an introduction. So there were no developments, everything was just like a beginning. That means the sequel could become a great adventure or it should be.

The five year old boy Pete, who lost in the wood after the car with his parents met a mishap, is raised by a dragon named Elliot. Now, eleven, meets some people from the nearby town who came with an agenda. It's like he got everything back what he had lost 6 years ago. Followed by misunderstanding and the human interference in the Elliot's enclosure, the chaos unleash and thrilling final act proceeds before the narration concludes in a style.

The kid who played Pete looked some kind of related to Sarah Snook, but he was good and so the others. The film was not good as I was expecting. The box office success was not that great comparing with other Disney films. So the sequel is in doubt, yet the story had ended with a wide open. I am sure you will enjoy watching it, because everything was so pleasant, but only a few people would like it at the end. I don't know if you are one, but definitely worth a try.