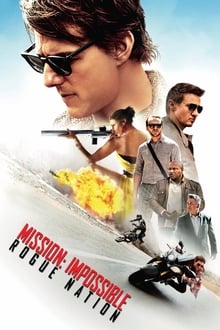 So after all that, I’m pretty convinced that the Mission: Impossible series just isn’t for me. That being said, how many film franchises can say that their fifth instalment was also their best? Probably just this one, and, maybe Fast & Furious. There’s actually a lot of parallels between those two lines of movies.

Pertaining specifically to Mission: Impossible though, this one truly is the best of the bunch in my opinion. It has it’s most complete female role to date, in fact, you could say that of any character. This is the first film that doesn’t feel like it entirely hinges on Ethan Hunt’s input. The characters surrounding him are actual people with their own personalities and ideas. And maybe it’s just that I’ve watched him do it five times in the past three days, but honestly I even sort of bought Tom Cruise in an action role this time around.

Final rating:★★½ - Had a lot that appealed to me, didn’t quite work as a whole.