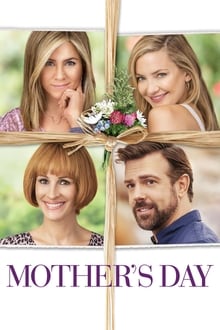 Mothers and their responsibilities despite struggling through.

I heard Garry Marshall has died a couple of weeks ago, so I decided to watch it rather sooner. He was a good director, one of the rare kind to focus on the women subjects and multi-starrer. I loved films such as 'Overboard', 'Valentine's Day', 'Pretty Woman', 'Frankie and Johnny' and many more. His films definitely not for everyone, but certain kinds of viewers would enjoy them and so did I.

This is the final movie in the Special Day trilogy. I certainly adored 'Valentine's Day', but the next film 'New Year's Eve' was pretty bad and this third film comes between those two. The story was okay, but nothing looked seriously compelling. The best parts were the actors, theirs present and performances makes it watchable. What Jason Sudeikis is doing in the 'Mother's Day' poster is the first thing I wanted to be answered.

The story opens a week or so early to the mother's day and focuses on the various mothers who are all has connections somewhere. Being the mother and their responsibilities were this film's purpose. Though I anticipated a bit emotional or the strong message, but it ended as an ordinary film. Surely a decent timepass film, but it had its chances to be a better one and it never untilised that opportunity well. A few people might like it, but most won't. Overall a feel good film, despite whatever your rating going to be at the end of the watch.