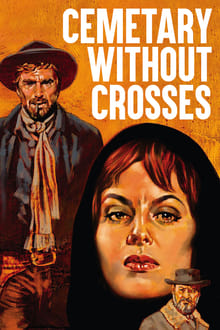 Une corde, un Colt (AKA: Cemetery Without Crosses) is directed by Robert Hossein, who also stars and co-writes the screenplay with Dario Argento and Claude Desailly. Starring alongside Hossein are Michèle Mercier, Anne-Marie Balin, Daniele Vargas, Guido Lollobrigida and Serge Marquand. Music is by Andre Hossein and cinematography by Henri Persin.

After being forced to watch the lynching of her husband by the ruthless Rogers family, Maria Caine (Mercier) asks her inept brothers-in-law for help in retribution. Getting no joy from the pair, she seeks outside help in the form of fast gun Manuel (Hossein), a loner living in solitude out at a ghost town...

It's dedicated to Sergio Leone, who directs one of the best scenes in the film, contains the Argento factor, so it's not really a shock to proclaim that Leone's influence is all over Hossein's movie.

It's a Pasta Western that operates in the void between the real and the spirit world, deliberately ethereal in tone, even sprinkling dashes of the surreal onto the hearty portion. Dialogue is used sparingly, but not to the detriment of films quality, and Hossein the director dallies in black and white staging, slow zooms and excellent usage of sound effects.

Much like the dialogue, the violence is pared down, there's no Blunderbuss infused blood laden approach to the evil that men do here, it's all very controlled and in keeping with the tonal flows that Hossein favours. The cliché's of the sub-genre are adhered to throughout, thankfully so, while the finale is suitably melancholic.

Thoughtful, sombre and ripe with blurry ambiguity, Cemetery Without Crosses is comfortably recommended to the Euro Western fan. 8/10