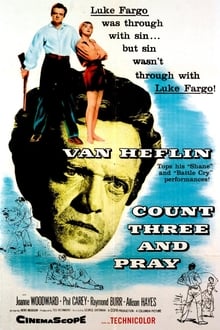 Count Three and Pray is directed by George Sherman and written by Herb Meadow. It stars Van Heflin, Joanne Woodward, Raymond Burr, Phillip Carey and Allison Hayes. A CinemaScope/Technicolor production, music is by George Duning and cinematography by Burnett Guffey.

At first glance it appears to be a film about a bad man finding his faith and coming good in the face of adversity, but there are many more strings to this particular bow. Even if it never quite reaches greatness.

Story has Heflin as Luke Fargo, a man who before the Civil War was something of a hell raiser, he loved women, he loved to drink, and he loved to fight. While serving in the war he was emotionally scarred by what he witnessed at The Battle of Vicksburg, he decided then that a change in his life trajectory was required. The bite here is that Fargo, a Southerner, fought for the North because that was the political side he believed in. So upon returning to his Southern hometown, he's persona non grata, a major problem since he wants to spread the gospel and cast off his previous sins. His efforts are further complicated when he locates himself to the derelict - ramshackle - church and parsonage, to find living there is a feisty orphan girl called Lissy (Woodward), a sharpshooting tomboy with fire in her belly.

Right from the off we find Fargo having to reach back to his hellfire club days, forced to brawl when confronted with outright hostility that's being instigated by self appointed town leader Yancey Huggins (Burr on splendidly nasty form). Oh there is plenty of God fearing folk in the town who desperately want to have the church up and running again, they want to give Luke a chance, but there's the constant feeling that a leopard never changes its spots, something that is further compounded by the attention Luke receives from the town "madam" (Jean Willes). While the fact that Luke is living under the same roof as young Lissy sets tongues a wagging, unhealthily so. Luke valiantly ploughs on, but his unorthodox methods are sure to be used against him...

As the relationship between Lissy and himself develops, you sense quite early on how things are going to pan out, but the by-play between Heflin and Woodward is great viewing. Initially you would be forgiven for thinking that Woodward's character is going to be greatly annoying, but Woodward quickly dispels those fears to deliver a quite wonderful portrayal of a wastrel who is unaware she herself needs guidance. Heflin also is great value, a real mixed bag of emotions, lurching from tough to vulnerable with consummate ease. We could have done with a bit more of Burr's villainy up front and center, while Hayes' (yummy!) treacherous femme comes off as under written, but the main characterisations are strong enough to support the thematics.

Nicely photographed around the Agoura Hills area of California by ace lensman Guffey, it's a pleasing production visually. Aurally the musical score provided by Duning has the requisite sedate and bluster moments, though fans of the original Star Trek TV show may find themselves suddenly whisked off on the Enterprise, Duning would clearly rework his score here for Kirk and Spock's adventures. Woodward playing a gal 7 years younger than she actually was asks us for some leeway, while the ending is to my mind a stretch too far, but this is an enjoyable experience for Heflin and Woodward fans. There's good action with knuckles (on a Sunday no less!) and horse racing, and plenty of breezy humour as well, making this a picture that's not quite a hidden gem, but definitely worthy of consideration by the Oater loving crowd. 7/10