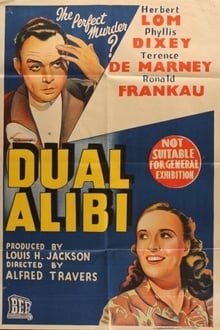 The duality of death.

Dual Alibi is directed by Alfred Travers who also collectively adapts the screenplay with Stephen Clarkson and Vivienne Ades from a story written by Renalt Capes. It stars Herbert Lom, Phyllis Dixey, Terence De Marney and Ronald Frankau. Music is by Stanley Black and cinematography by James Wilson.

Top French trapeze artists, the de Lisle twins (Lom), are hired by a British promoter to go work in Blackpool in the North West of England. Whilst in Blackpool one of the twins falls for an aspiring singer, causing tremors in the brother’s relationship. But when news comes through that they have won the French lottery, the brothers unite in their good fortune. However, good fortune is not to last as their world comes crashing down in a ball of treachery, greed, the misfortunes of fate and murder!

Moody monochrome, flashback structure, kilter circus atmosphere, femme fatale and a haunting musical score, welcome to the world of under seen British noir. The low budget is barely noticed as Travers and Wilson skilfully move the film at a good pace whilst draping it in shadows and murk, and the trick photography accomplishment that brings two Herbert Lom’s together on screen brilliantly belies that this is a poverty row production.

Lom is excellent in the dual role, giving each twin its own characteristic so the audience is never out of the loop. Yet he also deftly manages to ascertain a deep emotional bond between the two men, so when the darkness comes (the ending for instance is miserably no conformist) we feel the slap of film noir’s hand. Around Lom are effective performances from Marney as the repugnant Mike Bergin and Dixey who slinks about with conviction as smouldering fatale Gloria Gregg (AKA: Penny).

Highly recommended for anyone interested in British film noir. 8/10